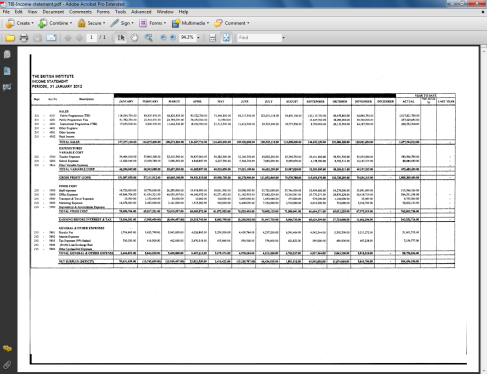 The 2012 financial statement from Binsar

I apologize for the small size of this document, but it was scanned from a piece of paper obtained within TBI Bekasi and sent as an email attachment to me. I then opened it in my email and took a ‘photo’ (screen dump) of the screen at that point, placed it in Paint and then saved it and uploaded it as a picture to this blog. It was fuzzy and unclear even in the original, and it is clealry moreso now. To read it, I had to zoom in on the original attachment. If anyone wishes to see the original file, I am happy to forward it to interested parties. Just email us at tbimafiavictims@gmail.com and we will help you out. I will also be forwarding a group email to all the TBI Mafia types, so they don’t need to make a request. It will be coming.

Even today TBI mouthpieces are heard saying that the TBI Bekasi victims never existed. They that we created them or that they might never have existed. It is easy to see why they have lied and misled people for so long. Extortion, sexual assault, robberies and unpaid salaries is the stuff TEFL nightmares are made of. No wonder TBI have lied to hide their sins for so long. By helping to cover up Binsar’s misdeeds they have become accessories after the fact, becoming willing accomplices in the crimes of Binsar Simorangkir. Too cheap to settle the matter in a fair way and pay out the unpaid salaries, which amount to a measly $5000 all told, they have instead perpetuated their lies and deception, whitewashing Binsar and his crimes.

But if these people never existed, how do we have the financial statement for 2012 for the school? Did it wing its way out of Indonesia and drop down on our desks? The answer, of course, is that former teachers were so angry about the way they were treated by Binsar that they seized documents which could support their claims of financial impropriety. They wanted other teachers to hear what they had been subjected to. They wanted other people to avoid the trap they had fallen into. But TBI has merely added insult to injury by lying that these TBI Bekasi never even existed and even making the preposterous claim that the financial statement is an ingenious forgery made to besmirch the name of TBI.