With the world’s mainstream media increasingly focused on the American election, especially the Battle of the Right-Wing Con Artists,  Trump, Cruz and Rubio, you could be excused for not noticing that the world is still in  the midst of an emerging markets crisis, with at least 29 nations affected. Yet for those willing to search a little deeper in the online news outlets this week, there were some dramatic developments in the fallout of the commodities crash. The most dramatic of these came from Latin America, where the commodities crash has ravaged the economies of Brazil and Venezuela in particular. In this week’s post, I will return to Brazil, a country which has suffered a recession so long and severe that some economists believe it will continue until the end of 2016 at least and eventually constitute a Depression (which must last 2 years to qualify).

Over the past two years, the Brazilian political world has been rocked by a multi-billion dollar corruption scandal at the state oil company, Petrobas. This scandal has already claimed the scalps of numerous legislators, and some of Brazil’s business elite have also bee arrested for their involvement. Among the politicians implicated was the former treasurer of the ruling Workers’ Party João Vaccari Neto, who received a 15-year prison sentence for accepting bribes from Petrobras. Until now, it has been said that the scandal did not touch Brazilian President Dilma Rousseff of the Workers’ Party herself, although many of her close colleagues and associates have been charged.

In October 2015 she was personally exonerated of any personal involvement, and must have hoped that the worst of the crisis was behind her. But that judgment was premature. By the end of the year, impeachment proceedings had been commenced against her by her political foes. Her approval ratings were lingering around the 10% mark, the lowest figure for any President since Brazil’s return to democracy in 1985, so she is certainly vulnerable. Yet even the impeachment proceedings against Rousseff were small beer compared to the shock of what happened in the past week.

The Arrest of Lula

In Brazil, former President Luiz Inacio Lula da Silva (popularly known as Lula) has long been regarded as a national hero, especially by those on the Left. His policies are widely credited with lifting tens of millions of Brazilians out of abject poverty. Yet on March 4 this heroic image was severely dented when Petrobas investigators raided his home and detained him for questioning for three hours in relation to kickbacks for his Workers’ Party from Petrobas. It is now alleged that the Workers’ Party were using Petrobas as a cash cow to finance their election campaigns. More damaging is the specific allegation that Lula received a luxury home and enjoyed luxurious international travel on slush funds received illegally from Petrobas.

“Former president Lula, besides being party leader, was the one ultimately responsible for the decision on who would be the directors at Petrobras and was one of the main beneficiaries of these crimes,” a police statement of March 4th read.

It is a sign of how much the commodities crunch has reversed the economic trends of the ’00s that this country, the B in BRICS, is now heading towards a Depression with its current President facing impeachment charges and its former President caught up in a fraud inquiry. Brazilian politics will be worth following closely over the next few months. 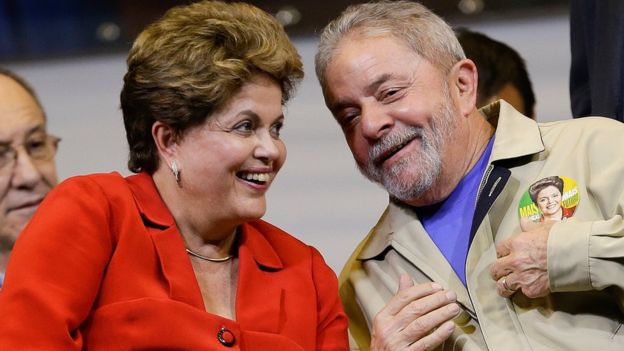 Dilma and Lula in happier times