This blog on the rogues of the Indonesian TEFL world hasn’t visited TBI much lately. There has been too much going on in the so-called ”multi-language” schools such as International Language Center and Global Bahasa, with many of their branches closing their doors for months at a time and refusing to give refunds. The chaos in the multi-language sector is so extreme that we have taken our eyes off TBI for a while, focusing on the new rogues on the block. That doesn’t mean that TBI is now going well though. In fact, there is increasingly a stench of desperation coming off the tired, old language chain, famous mostly for its liberal use of unqualified teachers.

The Stench of Desperation

Click on the TBI website and you will find endless promotions which offer large discounts for courses. Business English? 2 million rupiah off this month! Got a sibling? We’ve got a 15% discount for siblings! Fasting for Ramadan? Sign up now and you will get free restaurant vouchers to break the fast. There are 2 or 3 new ones every month.

So what, you might say? Does it necessarily prove they are desperate? In fact, there are very good reasons to think that they are. After all, Ibu Mariam, the erratic and capricious TBI director, was known to hate such promotions and discounts in the old days. In happier times, she was vehemently opposed to such giveaways, viewing them as cheap and tacky. It was her well-known view that premium schools don’t need to endless be giving discounts. If people viewed the school as ‘premium’ (a favored TBI buzzword), they would study there without the enticement of a discount.

Therefore, there is every reason to believe that TBI is increasingly desperate for students. Based on past form, Mariam would only agree to such discounts if business was doing badly. And they are now doing these discounts all the time. The stench of desperation increasingly wafts off this withered business.

The stench of desperation has been most acute in 2015 at TBI Malang. This school was closed for 8 months in 2013 after TBI’s joint venture partner threw them out of their own school for unethical conduct and broken promises.

TBI Malang has now opened a new school, but it has been the most aggressive of all TBI schools in giving away massive discounts and promotions. The one you see below from early 2015 found them giving away an entire level in a ”2 levels for 1” offer. Incredibly, this means they were giving away 7 months of courses for free!

Now the last time a TBI manager tried something like this was Helmy Vramerryan in TBI Semarang (now defunct) in 2009. This ”two levels for one” promo was mercilessly ridiculed at Head Office as cheap and tacky. Helmy was a joke for trying it. Yet now Head Office are doing it themselves. The stench of failure has now wafted from the franchise schools right to the centre of TBI. 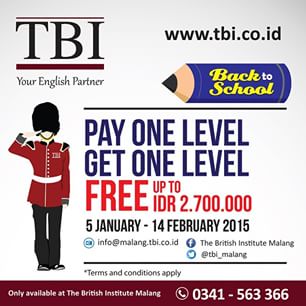