Somewhat reluctantly, we have decided to start coverage of yet another language school in Jakarta which is breaking promises and ripping off customers. The name of that school is Global Language Centre. This is a school which (just like Rumah Bahasa) has been making the fantastic claim that if you go there, you can learn 10 languages at once. Indeed, the ridiculous tagline of GLC is, “Belajar 10 bahasa dengan 1 harga!” The English translation is, “Study 10 languages for one price.” Wow, they really are some talented multi-linguists these GLC types, aren’t they? But before we scoff at their grandiose claims, it is important to realize that they have made a lot of effort to look the part. Here, for instance, is a photo of the rather impressive lobby of one of their schools.

GLC: All fur coat and no knickers

Setting up a school like that is not cheap. Jakarta is currently in the midst of a property boom and leasing premises in major malls is a pricey proposition. Yet we can find GLC in such malls as Taman Anngrek, Gajah Madah Plaza and Bekasi Hypermall. GLC has invested a lot of money in setting up these schools, knowing how important appearances are in image-obsessed Jakarta. The money hasn’t only been spent on leasing a high-profile premises either. They have gone to a lot of trouble to decorate the lobbies and classrooms in a way that will impress. If you study Japanese as part of your ’10 Language Package’, you will do so in a room wallpapered with images of cherry-blossom and pavilions by the side of peaceful lakes. Take a look for yourself. 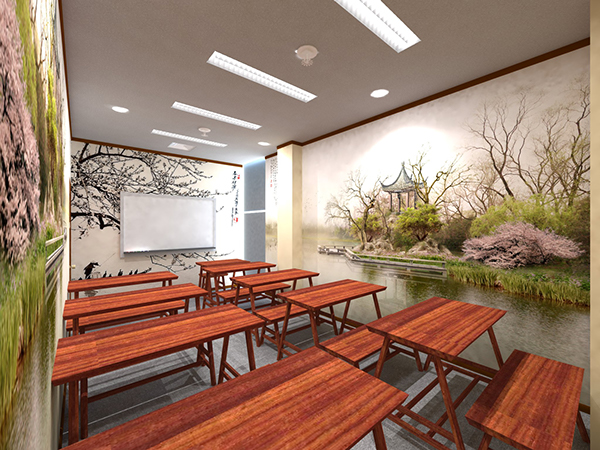 ALL FUR COAT AND NO KNICKERS

But don’t get too excited about the talented multi-linguists at GLC. You may like the wood-paneled look of the school lobby or their pretty, pink, cherry-blossom wallpaper, but the English idiom which best captures the essence of GLC is, “All fur coat and no knickers (underpants).” This idiom could be paraphrased as, “Having a superficially positive appearance that is belied by the reality, e.g., superficially elegant and beautiful but actually common.” GLC simply isn’t a business which can be trusted.

For one thing, do people really think they are going to speak Spanish, French, Korean, Mandarin and English fluently all at once? Learning to speak one foreign language well is a difficult undertaking which requires hundreds and hundreds of hours of dedicated study. The idea that the typical student is going to walk into Bekasi Hypermall, enrol at GLC and end up speaking 10 languages well is ludicrous. Yet the real situation is much worse. Many of their teachers don’t even have KITASes (work visas) and several of them have complained that salaries are often paid late. The chances of learning to speak a language from illegal foreign workers who aren’t even being paid on time are surely close to zero.

But it gets worse; the standard of English used in their advertising materials is atrocious. Just have a look at the passage below. This company are so unprofessional that represent themselves on the Internet in English riddled with fundamental grammar mistakes.

We are Yayasan Cerdas Bahasa in the brand name as Global Language Centre is a language centre that provide English, Mandarin, Korean, Japanese, German, France, Spain, Italy, Dutch and Bahasa Indonesia (for Foreigner).

There is a double verb in the first clause (they use both ‘are’ and ‘is’ to link ‘We’ to ‘a language centre’). They also need to add ‘s’ to provide. In addition, they don’t even know the names of the languages spoken in France, Spain and Italy. Finally, they don’t use the plural form of ‘foreigner’. That’s six grammar mistakes in their first sentence! I wonder if their Korean and Spanish skills are any better?

We will cover this worrying school in much more detail in the coming months, but the main point is not to study with them. Apart from lying to staff about work visas and salaries, their language skills leave a lot to be desired.