At the end of May 2012, the last expat I had hired left TBI. That was just 3 months after I finished as school manager. Nunu cleared out the whole lot of us in 3 months through sheer incompetence. This teacher broke his contract at the end of May, fed up with the shambolic management of Ashley Platts’s choice for the job- the CELTA-less, work-shy Nugraha Pratama. Just how much of a disaster Platts’s choice Nunu was can be gauged from the leaked timetable printed here (in two screen dumps). The week I left we had 130 hours of classes on the schedule. Here we find Nunu with only 93 hours of classes a mere 3 months later. In short he had lost around a third of the entire school within 3 months.

The details are also interesting. He had lost all of the “premium” contracts we had worked so hard to build up- Honda, Volvo, Trisakti, Garuda and so on and so on. The In-House program had almost evaporated, leaving only Pertamina from what was once, perhaps, the biggest In-house program of any franchise school. Interestingly, many of the classes that remained were depleted too. For example, I heard that the class Bodmin was down to only 5 students. Just 3 months before it had had 15 students (Level 1 Teenagers). This big class was once a money-spinner and had the potential to be so for a long time. Level 1 students will typically stay for several levels if they are handled right. The fact that there were only 5 students left meant Nunu and Ashley had severely damaged the school’s future. They had driven away most of the customers- Nunu with his laziness and bad management, and Ashley Platts with his crackpot decisions to recommend people as managers who he doesn’t even know.

You would have to say that with 35% of classes gone, revenue had plunged by at least that amount. (The In-House classes were especially lucrative, so it would probably be more.) Then you factor in the fact that 2/3 of the kids from Bodmin had left and there were other classes in that severely reduced category. (Canterbury, for example, was down to 2 students and due to fold as well). Then consider the fact that the big classes which remained had mostly stayed for the teacher who leaked the document. It was due to lose even more students in the weeks ahead. You would have to say that Nunu and Ashley cost to TBI Kelapa Gading at least 40% of their revenue and students within 3 months. This was a repeat of 2009 when Ashley’s previous pick, Helmy V. had laid waste to the school.

In these circumstances, it is no surprise that Nunu has been “removed”. We told you that this school was in chronic trouble back in 2012. Just as with TBI Semarang and TBI Malang, we told you this school was doing very badly. The remarkable thing about all this is that it took Pauwsan so long to finally see the real picture and get rid of Nunu. Cameron knew Nunu would fail in advance. The teachers in the school knew it was failing 12 months ago. Why did it take these clowns so long to see the writing on the wall? Must have been listening to that old spider, Ashley Platts, for advice. Another F grade for this business charlatan. Anyway, here are the timetable screen dumps.

To Be Continued with….Nunu’s Dubious Replacement…. 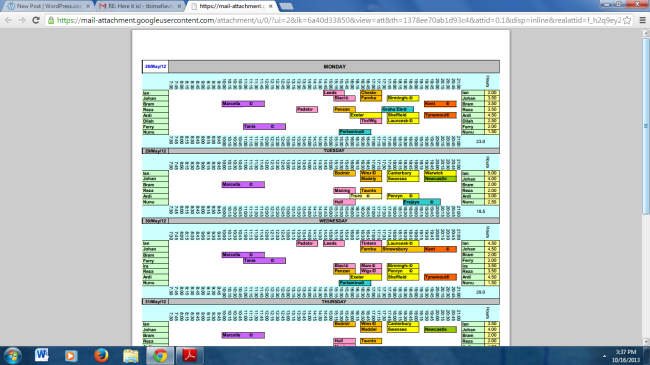