We have been alerted to a disgracefully cheap new promotion from TBI being run in November 2013. Even for these jaded TBI observers who have long doubted they could sink any lower, this one comes as a surprise. It turns out that TBI is now so cheap, nasty and miserly that it is now charging 5 year olds Rp 100.000 to enter a spelling bee! Yes, you heard that correctly. This week TBI are demanding that child entrants into various spelling and story telling competitions at Miniapolis on Level 3 of Plaza Indonesia cough up Rp 100.000 to enter a TBI spelling bee. They then have the nerve to say, “Win cash prizes and a trophy!” Um, would that happen to be the money that the kiddies handed you guys to enter the competition? Basically, this company has now become so Scrooge-like that they now demand that parents cough up the prize money for TBI’s own competitions. Unbelievable.

One wonders at the “thinking” behind this one. Did they sit around and say, “Um, a plastic trophy for little kids will cost us $20, and there’s no way Pak Reza (Mr Reza) will agree to fork that out. Let’s just steal the kids’ lunch money instead”? Not content with avoiding paying income tax and THR payments to their own teachers, have they now decided that they don’t want to pay prize money for their own competitions too? How cheap can these people get? “You want a competition, you pay for it!” seems to be the new mantra. How arrogant. How miserly. How short-sighted. How very greedy. How very TBI, really. It just shows the contempt with which their paying customers are now treated. 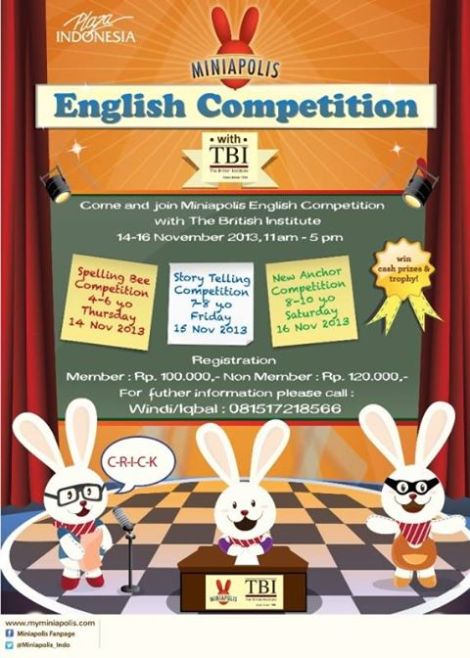 TBI chrages kids for their own trophies