Mariam Kartikatresni, the corrupt and immoral TBI Director, has recently quoted Mahatma Gandhi on her tweets! The quote she chose was:

No one can hurt me without my permission.

One wonders what she means by this. The TBI Director is perhaps boasting that the ongoing exposure of her mafia-like management style has not hurt her. We do not have Mariam’s permission, so we cannot hurt her. She is invincible!

We looked for a Gandhi quote about what the saintly hero of Indian Independence thought of dishonest, narcissistic ESL managers who fight not for justice or education but only to enrich themselves and to flatter their own gigantic egos. Strangely we didn’t find anything from the Mahatma saying it was great to lie to everyone that you cared about education, while embezzling money and protecting an Aussie con-man called Luke Preece.

Mariam, you aren’t Mahatma Gandhi. It is obscene for you to liken to yourself a great man when you are despised by everyone who works for you as a narcissistic and vindictive bully. You are more reminiscent of the wicked Indian Prime Minister, Indira Gandhi (no relation), who jailed 250,000 freedom and democracy activists in 1975 in order to maintain controlling by ‘suspending’ human rights. Mariam, you are tyrannical and dishonest and an embarrassment to everyone who works for you. You were recently dumped by a JV partner because: “Mariam adalah pembohong sombong yang tidak profesional sama sekali.”

Perhaps a better quote from Gandhi would have been this:

When I despair, I remember that all through history the way of truth and love have always won. There have been tyrants and murderers, and for a time, they can seem invincible, but in the end, they always fall. Think of it–always.

Mariam, you are the TBI Director, but no one respects you. In the end, you will fall, and everyone will be glad you are gone. 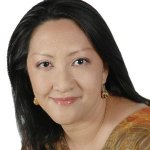