In this article we interview the former TBI School Manager who attended the TBI Serpong audit for 2011. We aim to lift the lid a little on this least-discussed of TBI franchise schools.

What do you know about TBI Serpong?

Not a lot really. I have been there once and that was on the 2011 audit of the school.

Who did you go with?

Isn’t there something contradictory here? At the same time as Luke was telling Mariam that you were a poor manager despite the booming profits (because Matthew France and Colm O’Mahony hated you), he was letting you audit a TBI Franchise school and give advice to other managers.

As usual Luke was feeding everyone a different story. He seems to think that the job of a manager is to lie constantly to everybody and keep them all separate so they don’t put the pieces together. This was in the final phase of my time with TBI and Luke was trying to convince me to resign. He said that he had managed to convince Mariam to let me accompany him on the TBI Serpong audit but that it wouldn’t happen again in 2012 because she was too concerned about my management skills with TBI Kuningan expat teachers. Around this time he was increasingly trying to convince me that Mariam strongly disliked me and I might as well quit in 2012 because I had no future with the company.

I met the owner. The owner was female. She seemed enthusiastic and ambitious.

Was the School Manager present in the meeting?

I’m not sure if he ever made it, but even if he did, he only lasted 4 months or so. The owner of TBI Serpong was advertising for a new School Manager again by March 2012. What do you make of that?

Not again! This is the first I’ve heard of it.

Who would this school manager have studied with for a month in order to equip him with the skills needed to manage a school?

He probably would have had to sit through Ashley Platt’s business model training.

You’re being very generous there. Ashley Platts plagiarized all that stuff. It really isn’t his.

It evidently didn’t help him very much anyway.

The training had been a complete failure. So many people who had gone through Ashley’s management training had either failed as managers or dropped out of the company soon afterwards. There was talk of cancelling the whole program around the time that I left.

Apart from the issue of Ashley Platt’s poor-quality training program, there is the issue of staff churn. If I told you that in the first two and a half years that TBI Serpong had been open the School Manager position had been advertised 3 times, what would you say?

I would say there is a major problem there. And that is an under-estimation of the problem, because at least once the manager position was changed without it being advertised. And there was also the issue of RW’s wife who was forced out of there as manager by some of the dodgiest people in the company.

If there were at least four school managers is a 3 years period, how does that strike you?

Very worrying. It is certainly a sign that something is very wrong. The school manager position is a challenging and rewarding one. People shouldn’t be resigning constantly unless there is something wrong with the business.

Who was the Franchise Manager between 2009 and 2012 when TBI Serpong changed managers 4 times?

It amazes me that Luke and his stooges are still trying to blame the whole situation on a single manager from TBI Kuningan when we learn that four managers have come and gone in 3 years at TBI Serpong and half a dozen expat teachers have left TBI Bekasi swearing that Binsar is evil and dangerous.

Their version of reality makes no sense at all. I think they are deluding themselves if they think that people don’t know that something is very wrong within Senior Management of TBI. 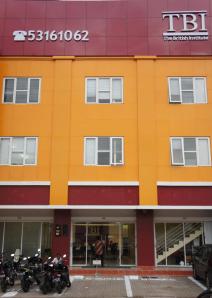